Oak, ash, beech, maple, birch – these are among the most popular species for hardwood flooring in the US (though they are by no means a complete list). They are all American trees. They are all available in a wide variety of colors and plank sizes. Their costs, on average, are comparable. And while they have other similarities, they are definitely not all the same.

Here are some of the differences between a few of the most popular flooring woods. We are not labeling any characteristics as pro or con, because they will largely be a matter of personal preference.

Oak, especially red oak (the name of the tree, not describing the color of the wood) is the most common wood used for flooring in North America. Red oak holds wood stains evenly and can be found in many colors. It can be light or dark, but the grain pattern is almost always obvious. The quality and consistency of the grain pattern is a characteristic buyers look for, and it affects the price. The more consistent the grain, the more expensive the floor will be.

Even harder than oak: baseball bats and axe handles are usually made from ash. The sapwood of an ash tree is cream-colored ranging to almost dead white, and its heartwood is tan to dark brown. The grain pattern, while apparent, is not as pronounced as in oak. Light color and consistent grain pattern are the most desirable characteristics of ash, and lightly stained ash sapwood floors are generally more popular in the market.

On the opposite end of the hardness spectrum from ash is pine, technically not a hardwood at all, though its hardness varies between species. Pine is known as a character wood because of its pinholes and knots, and its softness means it will soon have additional dents and gouges. Most people consider this to add to its character. Pine heartwood is the hardest and darkest wood of the tree. Heart-pine is prized for its natural

color, and it wears better than sapwood. As you would expect, it’s also more expensive. 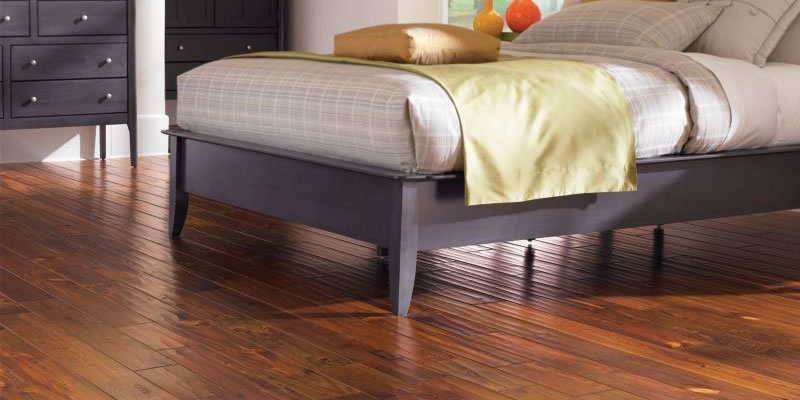 Maple is a light-colored, close-grain hardwood, meaning that its grain pattern is relatively subtle. It’s extremely hard and dent-resistant. Maple floors tend to be light partly because the wood is naturally light-colored, but also because it doesn’t absorb dark stains very well – dark-stained maple tends to be blotchy. All woods change color over time, and maple tends to become more yellow as it ages. The clearer the maple, the more expensive it will be. Natural flaws such as mineral streaks and pin knots lower the grade – and the price.